Commissioners hear input on 20 bridges in need of repair

The Howell County Commission met with Smith Engineering for a presentation regarding more than a dozen bridges in need of repair in Howell County.

Commissioners met with Jeremy Manning, a bridge engineer and project manager at Smith & Co. Engineers on Thursday to hear his input on the cost to remodel bridges in Howell County after the commission asked the company to look at various bridges in need of repair.

Manning said he was tasked with looking at 20 bridges.

He told commissioners there are many things they will need to consider moving forward, including design cost, engineering, drilling, hydraulics, permitting, and nonstop paperwork dealing with the Missouri Department of Transportation and the Department of Natural Resources.

However, Manning recommended that commissioners look at grouping bridges by a general size range and packaging them together before bidding.

“You are dealing with all your government agencies; you have to design the thing, and it’s costly. Typically, on the low end of the design, and it depends on the project's cost, if you are doing a $100,000 project, your price actually works in reverse,” he explained. “You can save a little bit of money on a big project, but you are doing the same amount of work in reality. So, no matter how small it is, things I would look at is generalizing your range.”

There are small structures, according to Manning, that are in the 35-foot range.

“We had the county come to us and say we only have this amount of money, and we’ve got this emergency,” he said, referencing past work in another county. “It was on the news. Some old road on Castor River had 55-gallon drums welded together.” He explained the Castor River in southeast Missouri is similar to the Current River, in that it’s “pretty wild at times. A lot of water.”

“Anyway, this community says, ‘We only have this amount of money and need to figure out how to build a bridge.’ It was a pretty large structure," he said.

Manning said he used an engineering software program to analyze the situation, and learned that as long as scour could be kept off of it, he could design a spread footing that would stay there even with that much water.

Scour is holes created when rapid water moves sediment from the bridge structure, weakening the bridge. Spread footing in engineering is a shallow support base in proportion to the structure’s width, and Manning said that even with the flow of water at that river, the base would stand firm and protect against scour.

After monitoring the bridge for 11 straight years, he said, the bridge has never been removed, despite water flooding over the bridge each year.

“But that’s where you’ve got this old mentality, back in the old days, of you can build a big enough footing, and it’s just going to stay there. Now, almost every single bridge I looked at in your county is that style structure. It’s just an old, butcher-style footing; it’s a significant footing," Manning said. "So if you were to take and have an on-system bridge, or if the Missouri Department of Transportation was doing that bridge, they would never go back with a footing design. It would always be H-pile, and that runs your cost up."

In other words, to take the existing bridges out altogether and replace them according to current MoDOT standards, would be more expensive.

According to Manning, commissioners could look at the positives of going with H-pile, a design involving dimensionally square structural beams, most commonly driven into the soil for deep foundation applications to support large buildings.

"Once you put that bridge in, it will not settle. It will not move. H-pile right now is a minimum of $100 per foot. So it’s expensive,” Manning said.

“The point is on those smaller structures, you could do two things: You could save $5,000 apiece for not having to drill, so you wouldn’t have to do rock exploration, figure out where your rock is, and you could save the cost of the contractor doing piling, as opposed to the spread footing"

Manning said Smith & Co. Engineers have seen it done time and time again, and it works.

“But that’s the idea we have, is taking these bridges and packaging them up. Not only in the bid but the design,” he added. “That’ll save you money, and I would do it on those small structures. We do it constantly. Pretty big savings, in my opinion.”

He pointed out that since there’s no drilling, if similarly-built bridges were grouped together for bidding at one time in a package, it creates a cost savings on the contractor side.
“If you bid five bridges at once, everyone sharpens their pencils,” he said.

Commissioners should further consider two things when grouping the bridges before going out to bid, he said: design savings and contractor savings. He said four bridges jumped out him as meeting the criteria right away.

“You can use the same beam and footing on all those designs,” Manning said. “You’ve got a nice set of plans in your hands for the rest of time. If you guys wanted to go out and throw together your own structure, you can look back and say, ‘Hey, maybe our guys can do this one day.’” He noted that many counties do just that.

“I’m telling you, you are looking at around 8% savings on engineering, and I think closer to about 10% on construction,” he added.

Manning reiterated if the county commissioners are looking at their priority bridges, he would look at some way to package them up.

“If you were to say, well, we’re going to pick our top priorities, it’s going to be two of these in the 35-foot range and two in the 65-foot range, I would probably still package them,” Manning said. “If you could break it up and do similar plans on three or four bridges, you will save on engineering costs for those bridges. This becomes costly when design, drilling and materials come into play."

Manning said the estimated total project cost of the 20 bridges he looked at ranged from $100,000 to $960,000 per bridge. By dividing the bridge projects into groups, where the same general bridge can be used, factors like design and inspection can be cut down to reduce the overall cost.

“While these remodels are necessary, the most cost-effective way to tackle them is utilizing a general bridge design that can cut down the engineering design cost,” he noted, reminding them that the design cost could be reduced by about 10%, and construction costs, by about 6% to 8%.

The commissioners thanked Manning for his presentation and said they plan to start with their major bridge projects and go from there. 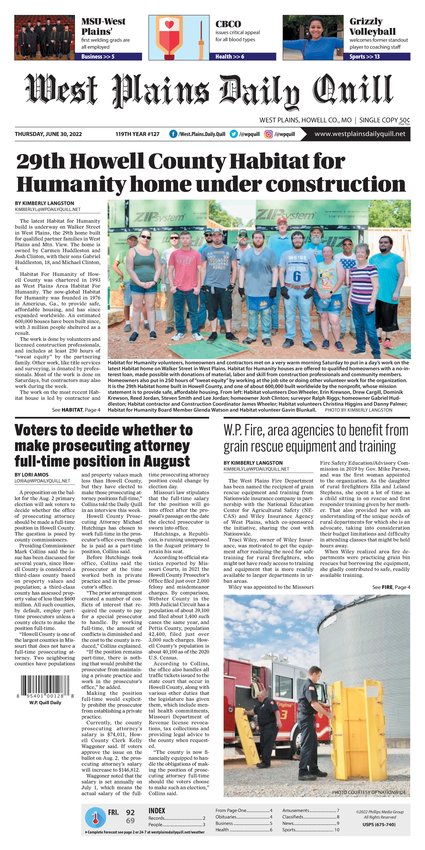