The Cystic Fibrosis chapter of West Plains will hold its annual fundraising concert featuring country music artist Eddie Montgomery, of Montgomery Gentry, at 7 p.m. March 18 at the West Plains Civic Center. It's the 35th year for the event, sponsored by K-Kountry 95 Radio.

Country duo Montgomery Gentry was inducted in 2009 into the Grand Ol' Opry, and has charted 38 singles on the Billboard Top 100 Country chart, with 13 No. 1 hits. Country music fans might recognize favorites such as "My Town," "Where I Come From" and "Something To Be Proud Of."

Eddie Montgomery was a cofounder of the band along with Troy Gentry, who died in a helicopter crash in 2017. Montgomery released his first solo album "Ain't No Closing Me Down" this past fall, available exclusively at Walmart and described as inspired by the Montgomery Gentry sound in memory of his late bandmate.

"They are one of the best country acts of the last 20 years," said Cystic Fibrosis West Plains Chapter volunteer Rick Frazier. "We're really excited about having Eddie Montgomery of Montgomery Gentry, especially for the 35th year."

Frazier added the Kentucky native is excited about performing in the Ozarks, his first concert in this area. The benefit concert has historically drawn a full house from not just this area but the surrounding and nearby states of Arkansas, Oklahoma, Kansas, Tennessee, Kentucky and Illinois.

Doors will open at 5 p.m. the evening of the concert, which will be preceded by a silent auction. At 6 p.m. tickets will be sold for the giveaway of a guitar donated by Ozark Trading Post in Mtn. View and signed by Montgomery. At 6:30 p.m. volunteer Billy Sexton will present donated items for a live auction.

The singing group Jessica's Friends will then open for the main act, with volunteer child performers that will soon meet to begin practice.

Tickets may also be purchased at West Plains area banks including Wood & Huston Bank inside of the West Plains Walmart as well as at the counter at Walmart, West Plains Savings and Loan, Liberty Bank and Simmons Bank in Mtn. View, Simmons Bank and West Plains Bank in Willow Springs, West Plains Music, K-Kountry 95 radio station in Thayer, Dora School, and from Regina Voyles in Winona and Sarah Honeycutt in Cabool.

Anyone wishing to donate items for auction or to enlist a child to perform with Jessica's Friends may do so by calling volunteer Lois Frazier at 417-256-5388.

Rick Frazier thanked everyone that has volunteered in the past 35 years, and all the businesses and individuals that donated items for auction.

About 60 volunteers help with the event, and last year it raised about $70,000 for cystic fibrosis research that stays nearby, including helping fund research at the University of Missouri.

Cystic fibrosis is a genetic disease present at birth that affects the lungs, causing a thickening of mucus in the lungs that is difficult to expel. There is no cure for the disease at this time, but research continues into cures and treatments have advanced in the past decades, leading to treatments that improve the quality of life for sufferers. 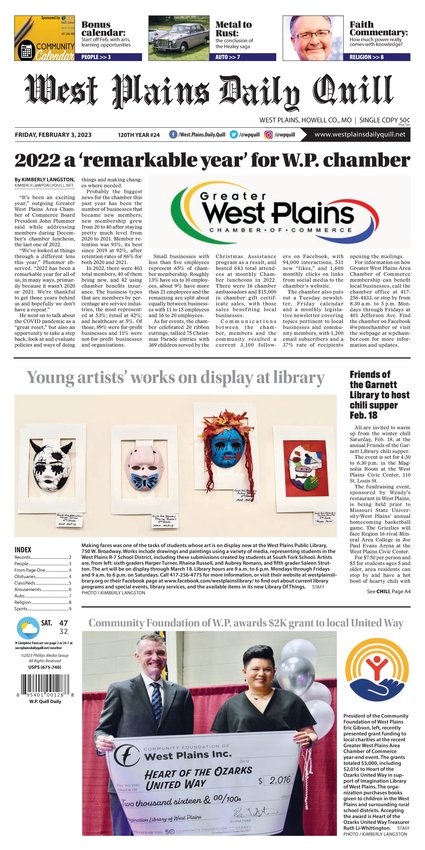