The West Plains High School Lady Zizzer basketball team gave the town so many reasons to be proud this season, and they aren’t finished yet. Were they district champs? Yes. Did they advance to the Final Four for the first time since 1998? No doubt. Did they make it to the championship? Absolutely. What about their overall record? 28-4.

That’s not the end of the awards. Judd was also named District Player of the Year. Brunson and Joyner also received All-District Honors.

Both Judd and Brunson were also named to the First Team All-State Team. Brunson also received the Academic All-State honor which requires the athlete to meet strict guidelines both on the court and in the classroom.

What about their coach? Head Coach Scott Womack was named District 9 Girls Basketball Coach of the Year .

With all of these accolades piled up, the greatest point of pride must be somewhere above, right? Wrong.

“It has been an honor and a joy to coach this team. I have enjoyed every minute of this season. It’s not the winning, it’s the work. They came in and worked hard every single day of the season,” said Womack. “There is a chemistry that doesn’t happen every year.”

The traits that should make all Zizzers proud, both current and former, is their work ethic and their humility.

The dominating nature of their wins never seemed to go to their heads. Every practice, every game, they came to play.

“As disappointed as we were to not bring home the championship trophy, being second in the state is something worth being very proud of. They will remember this for the rest of their lives,” Womack added. “They won’t be down long, they’ve already turned their eyes to next year.”

On and off the court these ladies taught us what it means to be Zizzers, and good citizens of our community.

Somewhere in the midst of a heavy practice schedule, and games and keeping up their academic excellence, this team found a way to raise over $12,000 for the Ozarks Medical Center Cancer Treatment foundation.

There were standout players of course, and their accomplishments have been well reported, but they played as a team. They won as a team, and they lost as a team.

The West Plains High School Lady Zizzers are an example to all of what it means to be good teammates, and that lesson is more important right now than ever.

Zizzer track riding the lightning in 2021 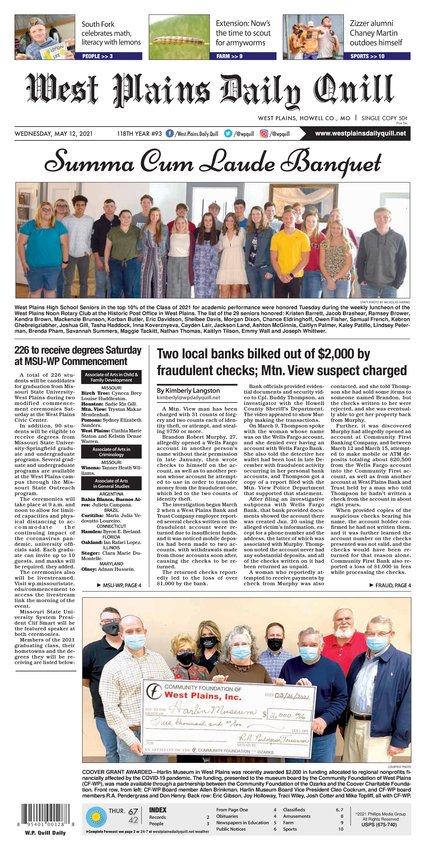