Maxine D. McCarty: The light of a hundred candles

On Oct. 13, Maxine McCarty, of West Plains, joined the ranks of the elite centenarian club.
Posted Wednesday, November 30, 2022 1:00 am
BY CHRIS HERBOLSHEIMER CHRISH@WPDAILYQUILL.NET

It was the thirteenth day of October in the year of our Lord nineteen hundred and twenty-two — Friday the 13th to be exact. The twenties were just beginning to roar. Al Jolson topped the charts with “April Showers,” “Robin Hood” was playing in the silent picture houses, and young people were dancing the foxtrot.

Meanwhile, on a farm just outside the small town of Corydon, Iowa, a baby girl was born.

Growing up on a farm during the Depression, Maxine learned the value of hard work, and making do with what one had.

“We didn’t have a lot of money, but we always had food, which was more than a lot of people could say,” she said.

A self-proclaimed “tomboy,” Maxine enjoyed climbing trees, riding horses and playing outside with her six siblings.

The farm where she lived was too far from the nearest high school to go back and forth everyday, and there were no school buses in the area at that time. So, at the age of 14, in order to continue her education, through each week, Maxine stayed in a boarding house of sorts in Corydon, where she would work doing chores such as cooking and cleaning to cover her room and board.

“Each Sunday evening, my father would drive me into to town in our Ford Model T touring car, and then each Friday after school he would pick me up and take me back to the farm,” recalled Maxine.

In 1940, she was working as a skate girl at the local roller rink — a job she took because it meant she got to skate for free.

It was at the roller rink where Maxine Grismore met Gilbert McCarty. He caught a glimpse of her one day, and was determined to get to know her better. Gilbert came into the rink every day after that, even though he was not a roller skater.

Soon after Maxine graduated high school, she and Gilbert were married.

Gilbert, a design engineer, took a job with the Missouri Highway Department in Willow Springs, and in 1952, the McCartys moved to their new home on Webster Avenue in West Plains, in what was then the “new” neighborhood. Maxine still lives in that home today.

Maxine and Gilbert would go on to have one daughter and one son. Their son passed during infancy, but their daughter would give them two granddaughters, and later, a great-grandson.

When asked how her neighborhood has changed in the 70 years she has lived there, Maxine replied, ”It’s not like it used to be. We used to know our neighbors, but people don’t get acquainted much anymore.”

She then reflected on the families who have lived in her neighborhood over the years, remembering each name and exact house as though they had just moved out the day before.

Maxine never worked outside of the house, but took great pride in making a home for her family, entertaining friends frequently, and of course, her homemade pies, which won countless blue ribbons at the county fair.

After 54 years of wedded bliss, Gilbert died in 1995. Maxine never entertained the thought of remarrying.

Perhaps the most fascinating part of a conversation with this spunky centenarian was not her reflections of the past, but rather her optimism for the future.

She told a few stories of people and places from days gone by, but seemed more interested in talking about the new Truck Patch grocery store going in Preacher Roe’s old building, which has now since opened, or the new health food store planning to occupy the former Battery Station location on Washington Avenue.

If the light from each candle on a person’s birthday cake represents wisdom gained in the course of a year, Maxine’s could light up the night.

W.P. Civic Center to host Aaron Lewis: Frayed at Both Ends on June 1 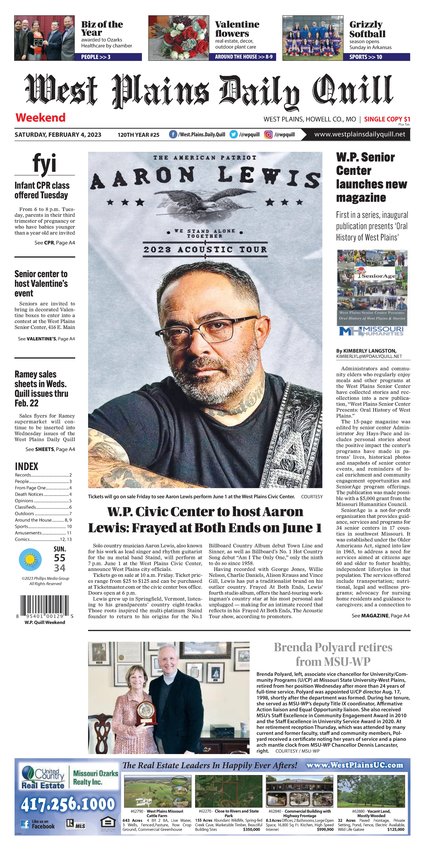